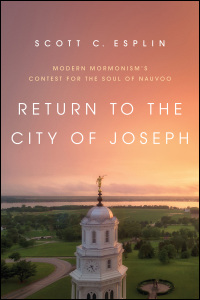 Nauvoo is constantly on my mind. Has been for a while, actually. Before starting The Kingdom of Nauvoo: A Story of Mormon Politics, Plural Marriage, and Power in Nineteenth-Century America—which I’m pleased to share is moving along in the line-editing stage right now, with an early-2020 release date—I was a BYU student participating in their “Semester at Nauvoo” program. For four months I got to live fifty yards from the Nauvoo Temple, where I could learn about the city’s history while walking its streets, touring its homes, and enjoying its gorgeous sunsets. From then on, Nauvoo has always claimed a piece of my soul, which is partly why I jumped at the opportunity to write about it.

I was thrilled, then, to see Scott Esplin’s new book, Return to the City of Joseph: Modern Mormonism’s Contest for the Soul of Nauvoo (University of Illinois Press, 2018). The book traces the history of the city during the century and a half following the point when a majority of the saints were forced out of Nauvoo in 1846, all the way to the reconstruction of the majestic temple on the bluffs in 2002. Chapters detail the new settlers who took over the city from the Mormons—history didn’t pause in 1846, they constantly remind visitors–as well as detailed overviews of how the historic buildings were restored in the twentieth history. Today, hundreds of thousands of tourists visit Nauvoo, learn its history, walk through the sites, and watch elaborate pageants. Some have even dubbed Nauvoo the “Mormon Williamsburg,” a reference to the Virginia city dedicated to colonial re-enactments.

The book’s subtitle, Modern Mormonism’s Contest for the Soul of Nauvoo, is a reference to one of its key themes: a consistent competition between the Reorganized Church of Jesus Christ of Latter Day Saints (later renamed the Community of Christ), which remained in the Midwest and followed Joseph Smith’s lineage, and the Church of Jesus Christ of Latter-day Saints, the Utah-based church that followed Brigham Young and his apostolic successors. Both faiths reverence Nauvoo as a sacred place, a testament to their pioneer forbearers. But each group, at times, used Nauvoo to wage a holy war against the other, as they jockeyed to demonstrate that they were the true inheritors of Joseph Smith’s tradition.

Though the book’s introduction claims that it “blends an academic interest in contested religious space with personal religious feelings for the events that occurred there” (x), fortunately there is much more of the former than the latter. Esplin’s LDS preferences ring clear—he is a professor of religious education at BYU, after all–but a majority of the book is basic historical overview. Both LDS and RLDS churches, Esplin details, capitalized on a tourism and historical reconstruction fever that swept America in the 1940s, and they were eager to pounce on a national “Mormon moment.” (Sound familiar?) Yet leaders for the two faiths diverged in how they approached the task. At first, the LDS Church invoked a secular narrative to highlight Nauvoo as the launching point for America’s greatest pioneer trek; later, however, they shifted to viewing Nauvoo as a spiritual tribute to Joseph Smith, and tooled the sites toward members of the faith. Conversely, the RLDS Church originally used their properties to highlight their succession claims; later, they instead emphasized historical accuracy. In an ironic shift, then, the LDS restoration projects became less secular, and the RLDS/Community of Christ became more.

Indeed, Esplin is at his best when detailing these types of transitions, and his general narrative–that the two churches grew more collegial over the years, to the point that they now get along swimmingly–rings true. I loved the stories of direct conflict, however, like the competing centennial celebrations in 1939, when the two communities produced their own attempts to commemorate the hundredth anniversary of the city’s founding. There are plenty of details and episodes that I found both new and entertaining.

There were also plenty of moments I wanted more out of the book, however, specifically concerning context. While Esplin certainly could have spent more time fleshing our the broader American context—most of those details are condensed in the final two pages of any given chapter, as if added in response to reviewer critiques—I was surprised at how little Mormon context we receive. That is, it seemed as if nothing was ever taking place outside Nauvoo, and that the city merely existed in a vacuum. Though the text fleetingly references broader trends, in general it is difficult to fully assess what Nauvoo’s restoration tells us about the institutions backing it, let alone the country in which it existed.

But those are critiques of the book Esplin didn’t write, which is not always fair. Return to the City of Joseph is a fascinating—not to mention efficient!—tale of how modern Mormonism constructed not only a historical city, but also a cultural memory. Given that the LDS Church decided to continue the Nauvoo Pageant when it is closing nearly every other pageants, it shows that the city will remain embedded within the faith for some time to come.

And personally, I really appreciated the background for a community I still consider home.