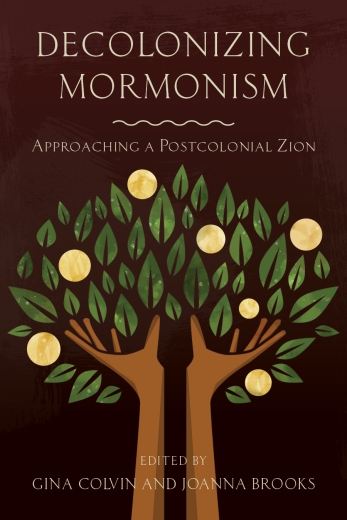 There are many books that influenced my development as a young Mormon academic, but few were as significant as Hugh Nibley’s Approaching Zion. A collection of essays spanning several decades, the volume was Nibley at his finest: cultural gadfly, materialist critic, and armchair historian. Even as I might have grown a bit disillusioned with his historical chops—it turns out Brigham Young wasn’t the intellectual and individualistic iconoclast Nibley promised!—several fundamental lessons from the book still shape me today: an abhorrence toward the gross accumulation of wealth, a love for intellectual inquiries, and, most importantly, a belief that one could still be a Mormon while simultaneously critiquing the faith’s mainstream culture.

Also, the book made me a Democrat, so there’s that.

Nearly thirty years later, Gina Colvin and Joanna Brooks have produced another book in somewhat the same vein. Decolonizing Mormonism: Approaching a Postcolonial Zion (University of Utah Press, 2018) not only borrows from Nibley’s title, but they also muse on their debts to the previous volume in their introduction. In some ways, this collection of essays from a dozen different scholars is certainly a sequel to Nibley: essays in this volume are unsparing in their critiques of Mormon culture, and the intellectual breadth found amongst the authors is truly jarring. Topics similarly include wealth, authoritarianism, and ideological exploration—all issues close to Nibley’s heart. The editors and authors also position the volume as one that was produced both within and with a love for Mormonism as a body of people; this is not an external attack from bitter observers, but rather a challenge from those who belong to the culture. That can, at times, make their critiques a bit more biting, but also much harder to dismiss—just as had been the case with Nibley.

There are, however, some significant differences with Nibley, beyond the fact that they engage with a theoretical literature on postcolonialism that Nibley likely never would have considered. Engaging these difference not only highlights the strength of this new volume, but also the distance Mormonism has come in the past three decades.

The first key difference is where the authors identify the primary problems with Mormon society. For Nibley, the problem was always one of culture, which in turn was rooted in ideals. The Mormon structure was pure, but its people possessed misplaced priorities. The only thing needed to reform Mormonism, then, was an ideological conversion—if the people were convinced of their misplaced materialism, his reasoning implied, they would repent, and all would be well in Zion. This is a story of declension, in other words.

For those writing in Decolonizing Mormonism, however, ideas and culture are mere representations of a much larger problem: institutional forms of systematic oppression. The Mormon church, like most institutions, reflects the society in which it was born and developed, and it therefore appropriated many of the racist and sexist structures that privileged some (primarily, white men of wealth) while disenfranchising others. No amount of intellectual reform, no degree of persuasion, can change this society without a concomitant reform of the structures that shape society. This would be a systematic transformation that acknowledges the foundational fraud, rather than mere intellectual vapidity. Mormonism’s golden years are not in the past, but in the future.

In short, Decolonizing Mormonism strikes at a system of power, not merely a bundle of ideas.

While this is the fundamental division between Decolonizing Mormonism and Nibley, it is not the only one. Because the authors of this new volume are charting the losses that resulted from institutional flaws, they focus on how marginal voices seek to change the entire system. Nibley was able to write from a position of privilege and power—his position as a cis-white male professor at the faith’s flagship university, with accolades and respect from both average saints and leaders, allowed him to write from the center of the culture. But Brooks and Colvin, as well as their authors, argue that only from the margins of society can we find the most poignant and powerful voices. As Thomas Murphy persuasively argues in his chapter, for example, no analysis of the Book of Mormon can truly be complete without engaging and amplifying the indigenous perspectives the book claims to engage. Similarly, Mica McGriggs’s brief yet persuasive essay argues that we cannot understand traditional Mormon practices—like girls’ camp—without digesting how they are experienced by people like her, a biracial woman attuned to being a “token” in white society.

While I don’t want to detail every chapter—they are all quite unique, and deserve attention—I want to highlight just one. Elise Boxer’s “This is the Place!: Disrupting Mormon Settler Colonialism” is part scholarly analysis, part personal reflection. For the former, she argues that the Mormon practice of “Pioneer Day” perpetuates the erasure of indigenous history in the Great Basin region. Indeed, the LDS focus on being dispossessed and persecuted does not allow them to see how they, in turn, dispossessed and persecuted the Utah tribes who lived in the region before their arrival. Then Boxer’s analysis takes a personal turn, and she discusses how her experience growing up native and Mormon caused moments of discomfort, as well as periods of symmetry. I found the entire chapter moving, and it made me reconsider how I could do better considering the way we celebrate and commemorate family, community, and religious history.

Because the book takes as its premise that Mormonism perpetuates a culture that has disenfranchised indigenous bodies, many of the chapters take a fairly direct and uncompromising tone. As they should. (Though there is a range, of course; Angelo Baca’s searing critique can be contrasted with Melissa Inouye’s gentle, yet incisive, examination.) This book, just like Nibley’s before it, is meant to be an indictment of both Mormon culture and Mormon studies: the faith community, as well as the scholars who study it, need to become less white, less male, less privileged, and less mainstream. It is a call to action that is meant to make the reader feel uncomfortable. (I know I certainly did.) Decolonizing Mormonism should prompt change, not mere reflection. It’s greatest worth, I’d argue, is in its cultural potency. Besides Approaching Zion, the only other book that I find comparable is Maxine Hanks’s Women and Authority: Re-Emerging Mormon Feminism (Signature, 1992), another essay collection that sparked decades of discussion. I hope it serves as a similar cultural touchstone.

I was a college freshman when I encountered Approaching Zion, and I am still dealing with the repercussions; I can only hope many people, even decades in the future, will have a similar experience with Decolonizing Mormonism.

(Note: you can listen to an excellent interview with the editors here.)