The Mormon History Association community is small enough that you typically know what books are forthcoming and when. It is very rare, then, that a book captures us by surprise. However, when Mary Campbell’s Charles Ellis Johnson and the Erotic Mormon Image (Chicago UP, 2016) showed up on Amazon last year, some were puzzled. The author wasn’t familiar to most in most MHA circles, and the topic seemed a bit, well provocative. However, after reading the volume, I’m happy to share that the book was a pleasant surprise. Indeed, it may be my favorite Mormon history title from 2016. (And that’s saying something!)

Charles Ellis Johnson is a fascinating figure in his own right. The son of a polygamous union (his mother was the third wife of a famous pioneer patriarch) who married a daughter of Brigham Young (Ruth was a daughter of Emmeline Free), Ellis was a member of Mormon nobility. But he also lived at a moment of cultural transition within the Mormon region: born in 1857, he made the pioneer voyage with his mother at the age of three, but would live long enough to see Utah (and the Church) become fully American. He was of pioneer stock while also looking forward to modernity. And while his marriage to Ruth Young did not last, the cultural paradox in which he lived did. He eventually became known as one of Utah’s most prominent photographers, as his portraits of LDS leaders, Salt Lake City streets, and cultural activities became the window through which Americans viewed their most peculiar residents. During this period of Americanization, Johnson’s many photographs (see one listing here) served as a connective link in this important cultural project. 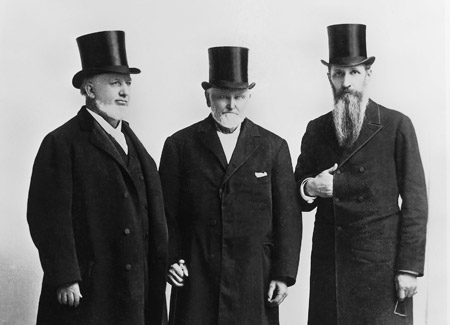 One of Johnson’s many famous photographs, where he depicts the First Presidency in 1893 as imminently modern, civilized men.

Campbell argues that Johnson worked to make Mormonism modern. He set up his own private tourist shop on a prominent corner just across from Temple Square and welcomed the city’s increasing number of guests. (See photo below.) One of his most famous productions, a tourist handbook, “can be viewed as an extended campaign to sell the Latter-day Saints and their city as civilized, cultured, and cosmopolitan” (23). He helped break Mormonism from its polygamous image by demonstrating that Salt Lake City was just like everywhere else. (His photographs of the Saltair Resort were some of his most famous.) His portraits of LDS leaders, especially during Wilford Woodruff’s presidency, “forged their own new LDS image-body during the years following the First Manifesto” (40). Johnson even captured some of the most famous images of Utah’s female suffragists, connecting them to the broader cultural and political movements they yearned to be part of. In an era when Mormonism needed a new public relations front, Johnson was ready with his camera.

One of Johnson’s photographs from his tourist handbook. Note that Johnson’s “Kodak” shop is featured in the bottom-right corner.

There are two historiographical interventions that are noteworthy, one to a common and famous trajectory and the other to one still unexplored. First, Campbell’s tale adds more flesh—in some cases, literally—to the tale of American assimilation. Thomas Alexander’s classic Mormonism in Transition turned thirty-years-old last year, so it was time for some new perspectives. It is only appropriate, then, that both Campbell’s and Tom Simpson’s book, both of which appeared in 2016, add new nuances and challenges to that story. In both cases, Mormonism’s transition is more nuanced, dialogic, and complex, as Mormons are seen simultaneously looking backward and forward. This was not a teleological march toward modernity.

The second intervention steers us more into the social history of the era. Beyond all the fascinating arguments, ideas, and details provided in Campbell’s narrative, I am especially excited to get a better idea of Salt Lake City’s progressive culture. As I hinted at in my review of the Amasa Lyman diaries, we have this staid perception of Utah’s capital as under the thumb of the Mormon hierarchy, the pious perch of Puritan performance. But just down the street from LDS headquarters there was a vibrant community that sought to fit in within the modern world while still under the shadow of the SLC Temple. Next door to Church leaders who called for an emphasis on sexual modesty, there was a photoshop that created risqué postcards. Eventually, someone will have to pull all these divergent threads together and create a seamless tapestry of Utah’s surprisingly progressive social life.

The book is not without its problems—or rather, its frustrations, at least from the perspective of a historian. The theme of artistic tension sometimes subverts necessary contextualization and chronological development. Charles Ellis Johnson is the crucial figure of this story, but his life is mostly shrouded behind the analysis of his paintings: details concerning his youth, growth, faith crises, and especially his later life and death are mostly cast as asides. Chapters are based around themes, and so the narrative time jumps between years and even decades, sometimes becoming redundant and at other times becoming contradictory. There is a tale somewhere in there of a man who was the quasi-official photographer for the LDS Church in the 1890s, lost his faith (or money), and then turned to racy photos of women in the early 1900s before falling into irrelevancy. But that sort of trajectory is not fully realized. Further, later chapters seem a bit disjointed compared to the rest; for instance, the chapter on women suffragists fails to really connect Johnson besides the fact that he took many of their famous photos. Did he really support their cause? Readers are left to wonder. And the final chapter, an aesthetically beautifully and intellectually rich exploratory essay that interweaves Johnson’s self-portrait, Joseph Smith’s “glass-looking” reputation, and Joseph F. Smith’s attempt to force Mormonism into modernity, appears more as a stand-apart article than a book’s conclusion.

But don’t let these critiques fool you: I loved this book. Once I started it I couldn’t put it down. Not only is the research exhaustive and the writing clear and persuasive, but as a novice to photographic history I was entranced with this introduction to the world of visual culture. Mary Campbell’s book is not only a must-read treatment in the sphere of Mormon history, but it is a wonderful contribution to the literature on religion, photography, and gender. It is a model monograph, and Campbell is a triumphant scholar. Further, Chicago University Press should be commended for producing such a beautiful volumes that features 85(!) high-quality visuals. I hope the book gets the broad audience it deserves. I know of no other work in Mormon history like it.