This semester I am teaching undergraduate courses in American History to 1876 as well as American Religious History (the entire sweep!). Since both classes are supposed to begin with the “origins” of America, the first few days cover much of the same material. (The third or fourth meetings diverge, of course, as the survey class remains in the early colonial period for a couple more weeks while the religions course vaults into the eighteenth century.) As I prepared curriculum for both classes I was struck with the governing theme I have chosen for each: I wanted my students to recognize that diversity was at the heart of the American experience from the very beginning. I therefore planned activities and discussion topics for the first week that would emphasize this idea and set a tone for the entire semester. This post will focus on what I did in the survey class, and Part II will do the same with my American Religions course.

In the survey course I mostly followed Joe Adelman’s excellent suggestion by asking the question, “when does American history begin?” Students offered a myriad of possibilities: 1776 (the Revolution), 1620 (the Mayflower), 1607 (Jamestown), and 1492 (Columbus) were the most common answers. Some quickly caught on to the ploy and suggested, “what about all the Native Americans who were here a long time before Europeans?” Exactly. I then asked, “what does American history look like if we start the narrative from 10,000BC?” For one, we would need a lot more than 16 weeks to cover all our material. But more importantly, the story would not be framed around triumphant expansion, population booms, and the extension of liberty. Those elements are certainly there for a certain demographic, but they don’t tell the whole story. Also included would be a focus on the loss of land (as tribes were forced to forfeit much of their territory), demographic decimation (the continent was more densely populated in 1491 than 1776), and the loss of freedoms (as indigenous populations were forbidden the rights of citizenship). That’s a more messy, but also more accurate, narrative.

But that was not the only activity meant to add nuance to the students perspective. I also used a series of maps to help students contemplate and discuss how our geographic frameworks both reveal and shape our understanding. First, I show a typical depiction of colonial British America. We note how the emphasis is on the east coast, but that western lands are open and ready to be conquered. The general emphasis, which coincides with later ideas of manifest destiny, is on east-to-west movement. (The Native American perspective, of course, looks west-to-east as they were forced to consolidate in western territories.) 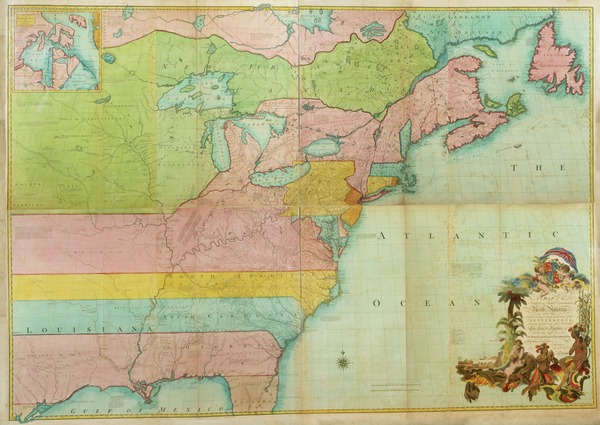 But what if we look at colonial America from a Spanish perspective? We talk about how the following map focuses on the natural resources of the continent, as well as how it was oriented on the inland, land-based regions. This mirrored the Spanish approach to colonization, mineral excavation, and mixed labor. The migration is northward from Mexico as they colonized upper regions, like Texas and the Southwest, above their original settlement. If you were to choose an orientation for this perspective, it’d move south-to-north.

But what if we look at colonial America from a French perspective? France began colonization from the northern end, which is reflected in this early map that looks southward to the rivers and lakes below. The began in Nova Scotia, moved inland to the Great Lakes, then eventuallyfollowed the Mississippi River all the way south to New Orleans. This reflected their emphasis on sea routes and fur trade. 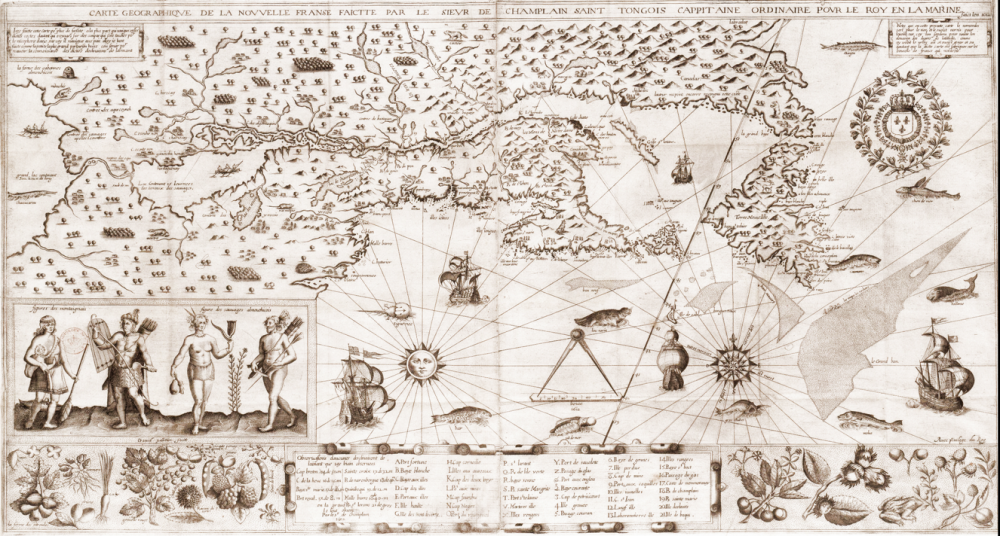 I also show them this map of French America which clearly demonstrates their focus on the “heartland” of America and their reliance upon the continents many rivers. All of French trade, just like the many North American rivers, flowed downward from present-day-Canada to the Gulf. If I were to characterize this orientation, I’d frame it as north-to-south.

More than merely drilling in the point that maps are cultural constructions that reveal much about the assumptions undergirding the colonization project, I want my students to recognize the base principles of the historian’s craft. How we frame our story is a reflection of what we want to get out of it. If we rush toward the British settlements that hugged the eastern seaboard and slowly worked west, then it is clear that we are prioritizing the triumph of an Anglo-American narrative that did not reach the entirety of our current geographic nation until the end of the very end of this semester’s course. That’s quite a narrow framework. Indeed, if I were to follow that story, then the state I am teaching in, Texas, doesn’t really enter the scene until the 1840s, and the residents of the territory pop up out of nowhere. By orienting the story around a myriad of perspectives, populations, and narratives, however, diversity is placed front and center.

As if that weren’t enough, we close the first week of class with a discussion of Lyra Monteiro’s excellent essay, “Race-Conscious Casting and the Erasure of the Black Past in Lin-Manuel Miranda’s Hamilton.” We talk about what an “exclusive past” looks like, and what that type of approach tells us about our own priorities and assumptions. This class, I tell them, will aim to upend that simple story by placing voices and bodies that are usually on the margins on center stage. Only that type of approach can capture a more complete vision of America’s past. And only that emphasis on cultural diversity can give context to our continued problems dealing with pluralism.