It only takes two long sittings to make it through prolific author Jill Lepore’s recent book, Joe Gould’s Teeth (Knopf, 2016). Which is fitting, because it only took Lepore a year to write it. The book is an extension of her New Yorker essay by the same name, which gives you a taste of the tale’s intrigue as well as Lepore’s masterful style.

The story is fascinating enough. Raised by a privileged family and prepared for a Harvard-trained medical career like his father and grandfather before him, Gould’s life was driven by two characteristics: his madness and  obsession with writing. (Lepore speculates he suffered from hypergraphia.) He was kicked out of college (and still later got his degree through special arrangements), got caught up in the eugenicist movement, walked the length of Canada, and eventually settled down in New York where he personally witnessed the Harlem Rennaissance. Gould became close friends with leading modernist figures like Ezra Pound and EE Cummings, primarily because they were impressed with his grandiose project: an oral history of their time. He (and they) proclaimed that he had written millions of words and that the manuscript was one of the most important initiatives of the century. 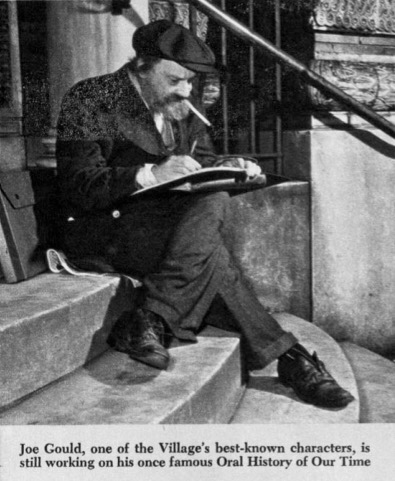 The problem was that outside of a small circle, and besides a few excerpts published in various venues, the manuscript seemed non-existent. Gould became increasingly insane later in life, moving in and out of asylums. The New Yorker essayist who made Gould a national figure in 1942, Joseph Mitchell, later came to regret taking Gould’s word for granted and wrote another essay, after Gould’s death, announcing he was a fraud. A movie was made based on Mitchell’s work. Gould was now dismissed and tucked away to irrelevancy.

Yet Lepore was not convinced. She started pulling at the threads to get a better perspective of what actually happened. She discovered that after Mitchell published his exposé he was inundated with letters from people who insisted there was an oral history. And through even more scavenging—there is a lot of impressive archival research for such a small book—she was able to discover there was a multi-volume history. Kind of. Portions were tucked away in various collections. But they were odd. Gould was never as consistent as he claimed (he started and stopped many times, and most of the notebooks were lost or destroyed), and the history was never what most people thought. Rather, it was tied into a deeper, darker part of Gould’s past: his obsession with Augusta Savage.

Savage was an African-American sculptor at the heart of the Harlem Rennaisance. She was talented and respected, and was even trained in Europe, but was never able to achieve permanent success. She died in poverty and obscurity. She also spent a considerable amount of time trying to dodge Gould, who was obsessed with her. He told people they were engaged. He stalked her. Perhaps molested her. Possibly raped her. All this even after he believed blacks to be an inferior breed and decried interracial relationships. He was a creep. By the time she finished researching the book, you could tell Lepore was repulsed by her subject and refused to chase down more leads.

And yet Gould was frequently enabled by powerful figures. Even after he groped women. Even after he devolved into an unreliable beggar. He was still given chances. Savage wasn’t. The injustice of these comparative lives is stark in the narrative. This is a story of how the stories we tell can either hide or expose the unfair nature of American life.

I noticed an interesting continuity I found between this book and Lepore’s last, The Secret History of Wonder Woman (published way back in 2014). Both books traced the secret (and sexual) lives of eccentric men who were around Harvard around the 1910s and later (and remarkably) developed practices that became quite popular and important, but also divorced from their controversial founders and founding moments. In Wonder Woman, it was William Mouton Marston and the lie detector; in the most recent work, it’s Joe Gould and the recording of oral histories. I don’t know what the overall meanings or importance of these similarities are, but I’m excited to see what Harvardian eccentric Lepore finds next!

One quick word on method. This book is as much about the historical craft as it is about a historical tale. Lepore invites the reader into her investigative process of peeling back layers of illusion. It is about staring at the ugliness of the past, feeling the weight of historical distance, and trying to make sense of it. The book is more a New Yorker essay than a scholarly monograph, but it’s also an essay about the process of writing a scholarly monograph. (Her description of tangled balls of yarn on page 47 is an apt metaphor for the whole book.) I actually think this would be a great book to assign in a methods class for undergraduates. At the least, it’s a terrific choice to recommend to friends who are interested in knowing what a historian does.

And the fact that it’s a helluva story, written by one of the masters of the craft, helps all the more.