The famed British author Charles Dickens was not a fan of Mormonism. Joseph Smith, he wrote in 1851, was an “ignorant rustic” who “sees visions, lays claim to inspiration, and pretends to communion with angels.” And most damning, according to Dickens, was that Smith dared to claim his fantasies not in the superstitious era of bygone antiquity, but rather “in the age of railways.” Railroads were just then sweeping over both America and Britain, and were represented the new modern stage into which humanity had entered. What made Mormonism so laughable, therefore, was that it sought converts in a period supposedly so advanced that everyone should see through the fraudulent sham. 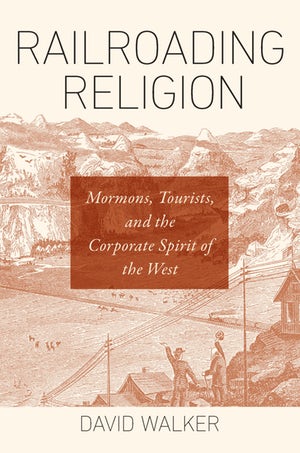 In 2019, another author, UC-Santa Barbara scholar David Walker, similarly used the railroad to discuss modernity and Mormonism. But in Railroading Religion: Mormons, Tourists, and the Corporate Spirit of the West (UNC Press), Walker makes a different argument: rather than wilting in the face of modernity, Mormonism’s history challenges the very concept of modernity itself.

When Dickens juxtaposed the rationality of railroads to the irrationality of Mormonism, he was far from alone. Further, many in America believed the advent of the railroad spelled the doom for the controversial faith nestled in the Rocky Mountains. Walker’s first chapter outlines what he refers to as the “death knell thesis”: that once Utah was connected to the rest of society, enabling the constant flow of both ideas and products between Deseret and American culture, the tyrannical cohesion that held Mormon converts hostage would crumble. Indeed, even as some politicians famously argued for the federal government to take a more aggressive stance rooting out the troublesome sect, others urged them to be patient, finish the transcontinental railroad, and wait for nature to take its course. END_OF_DOCUMENT_TOKEN_TO_BE_REPLACED

So, while I’m still two months away from American Nationalisms finally hitting the shelves, I’ve been working away on my second book. It’s tentatively titled Democracy’s Discontents: A Story of Politics, Polygamy, and Power in Mormon Nauvoo, and it is a microhistory of the Mormon city-state that was settled on the Illinois side of the Mississippi River between 1839-1846. (I’ll post a basic summary below.) I’ve been working off-and-on with it over the past two years, and I’m currently about halfway finished. My goal is to have a complete manuscript next autumn.

Anyway, here’s the news: I’ve agreed to a contract for it to be published with W. W. Norton/Liveright. This is a dream come true for me, as not only is Norton one of the best publishers in the world, but the Liveright imprint has a prestigious tradition of excellent historical titles. It’s truly an honor to work with them. And even better: I get to work with legendary (and award-winning!) editor Bob Weil, who is known for working with many of the great historians like Annette Gordon-Reed, Edmund Morgan, and most recently Jill Lepore.

Thanks to the many people who have read drafts of chapters for me, as well as my agent, Giles Anderson, who navigated the proposal through (for me) uncharted waters. Now to write the rest of the manuscript!

For those anxious for more, here is description of the project I used in the proposal:

On April 11, 1844, at a secret meeting in a besieged American town on the banks of the Mississippi River, Joseph Smith was appointed “prophet, priest, and king” of a clandestine council intended to rule the world. Smith already had no shortage of titles. He had served for fourteen years as prophet and president of the Church of Jesus Christ of Latter-day Saints, a radical religious movement that claimed over twenty thousand followers and was commonly known as the Mormons. He was mayor of the Mormon city of Nauvoo, a town that boasted some twelve thousand inhabitants. He was appointed lieutenant general of the Nauvoo Legion, a title that had not been bestowed upon an American since George Washington and a military force that, with several thousand men, nearly rivaled the nation’s standing army. Just a few weeks previous to the April meeting, Smith announced his campaign for the United States presidency. Thanks to the rapid expansion of his secretive polygamous practice, he also claimed the title of husband to over thirty women. And after a mob killed him two months later, Smith earned the label of martyr. The Mormon prophet wore many hats.

Joseph Smith’s various titles and roles were all designed to introduce novel, if controversial, solutions to the American nation’s problems. A little over a half-century following American independence, democracy was still an experiment. The practice of political self-rule opened new possibilities for the nation’s citizens, but it also posed new problems. Most vulnerable were those on the margins of society. What happens when the opinions of the mainstream—what French observer Alexis de Tocqueville called “the tyranny of the majority”—trampled on the rights of minorities? Some peripheral groups offered drastic proposals. Few, however, were as controversial as the Mormons. After being evicted from Missouri by a state-sanctioned mob, members of the faith gathered in an Illinois town and inaugurated one of the most radical experiments in American history: in response to political corruption, they centralized authority in their priesthood leadership; to overcome their marginal status, they voted in bloc; to counter a society becoming increasingly unhinged, they implemented a patriarchal structure; to correct a nation that was led astray by the voice of man, they found order through the voice of God.

This book tells the story of Nauvoo’s rise and fall between 1839 and 1846. It draws from a broad collection of primary sources, most of them overlooked and some of them used for the first time, to narrate a moment of political and cultural crisis on the frontier. In doing so, this manuscript offers a case study of the perils of democracy in antebellum America. How should a nation govern those religions that fall outside the boundaries of acceptability? What happens when a religious group transgresses the line between church and state? How can marginal groups react when the voice of the many infringes upon the rights of the few? These were important questions for a nation still exploring the potential and pitfalls of democratic rule. Even as many celebrated Jacksonian America as a harbinger of peace and stability, the thousands who gathered to the theocratic city-state of Mormon Nauvoo demonstrated cracks in the united façade. Some contemporary observers expected grand things. New York editor James Gordon Bennett believed the Mormons would swallow up the “lukewarm Protestant sects” and incite a “great religious revolution, as radical as Luther’s to take place in the Christian world.” But even after the city’s evacuation, the story’s importance was no less apparent. In today’s age, where the meanings of “religious liberty” and “democracy” are once again under debate, the lessons from this drama that played out during the 1840s are even more relevant.

No history of Nauvoo has been written for an audience outside of the Mormon community in over fifty years. This microhistory aims to document its underappreciated story for a general readership. While general overviews of early Mormonism and its antebellum climate have touched on Nauvoo’s importance, few works have specifically focused on the political context for its developments. Democracy’s Discontents, besides providing a narrative overview of Nauvoo’s climactic events, seeks to make at least three contributions. First, it will demonstrate that the conflict between Mormons and their neighbors reveals much about American debates over democratic rule. This is a story about how religion challenged, reaffirmed, and revised traditional boundaries of political governance in an era of cultural disruption. Second, it will argue that Mormonism’s political activities were intricately connected to their controversial domestic practices, most notably Joseph Smith’s introduction of polygamy. The private and public were blended into a mixture of social reform and revolution. Women, in turn, played a surprising role in how power was wielded in the city, though to unexpected ends. And finally, Democracy’s Discontents will explore broader themes of religious belief and secular politics, including the role of an organized and mobilized church in a modern democracy. The message of Nauvoo’s story is both tethered to its time as well as relevant to its many legacies.